Alex Henning is a Theatre and Dance Studies scholar, dramaturge and journalist for contemporary dance and performance. As a dramaturge she works with artists including Angela Alves, Hendrik Quast, Lea Moro, Peter Pleyer and Käthe Kopf. She is a member of the steering committee for the Berliner Tanz∆rchiv. As a journalist she writes for the portal Tanzschreiber and the magazines Tanz and Tanzraumberlin. It feels like entering ada studio in 2015 was the beginning of all of it: until 2019 she co-curated S.o.S. – Students on Stage; Alumni.Tanz.Berlin und A.PART together with Cilgia Gadola and Johanna Withelm and witnessed the works in ada studio as Studioschreiberin from 2016-2018. She is interested in questions about social background and humour, archives and power, the visibility of diverse, non-binary bodies in dance and performace, crip time and text bodies.

Julek Kreutzer is a dancer and choreographer living in Berlin. She studied dance, context and choreography at the Hochschulübergreifendes Zentrum Tanz Berlin (HZT Berlin). She is a founding member of the association Tänzer ohne Grenzen e.V. As a dancer, she has worked with Lina Gómez, Anna Nowak, Alice Chauchat, Lyllie Rouvière and Bella Hager, a.o. Her piece Entenübersetzung brings performers with and without prior experience together on one stage and questions the boundaries, spaces and viewing habits of a theatrical event. Since 2020, she curates the festival A.PART together with Diethild Meier, Gabi Beier and Alex Hennig. She also curates the Tanztag for young choreographers at the annual Hoffestspiele at Expedition Metropolis. She is a scholarship holder of the pilot project Tanzpraxis 2020/21 of the Berlin Senate, DanceWeber in 2021 and one of 6 artists of the international residency programme DanceMe UP in 2021/22.

Diethild Meier lives in Berlin and works as a freelance dance artist in various collaborative constellations and creative positions. She studied “Dance, Choreography and Context” at the HZT Berlin (BA 2015) and has since participated in numerous dance productions. She developed a close collaboration as a dancer and co-creator with choreographers Lina Gómez (2014 to present) and Mirjam Gurtner (2018 to present). With the support of the stipend TANZPRAXIS 2020/2021, she is studying the movement principles of martial arts (Kung Fu, Tai Chi, Qi Gong), and lets that feed into her dancing methods. She works as a production manager for several Berlin artists and is the dramaturg of Nir Vidan since 2019. Together with Julek Kreutzer and Alex Hennig, Diethild is curating the A.PART festival for Berlin dance students and alumni at ada Studio Berlin. Diethild is a photographer (Diplom Fachhochschule Dortmund 2008) and has been documenting contemporary dance in Berlin in still and moving images for 7 years.

when I grow up I want to play the keyboard 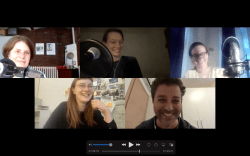 what is in the air 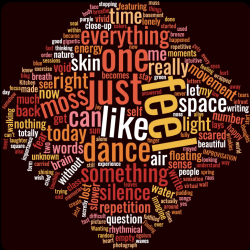 wordcloud of the A.PART Festival Blog
3rd of May 2021
by Giovanni Sabelli Fioretti
dramaturg, dance scientist