I would like to share a research process for a forthcoming dance piece, linking contemporary clowning and installation. In the team, we explore “outbursts of anger” with the stylistic means of fables and fairy tales. What happens in the explosion of a powerful affect? How can this expressive phenomenon be turned into a visceral experience that burrows into the skin?

Alica Minárová is a choreographer, dancer and performer, currently based in Berlin (DE) with strong ties to Prague (CZ). Her main interest is to search for humor that emerges at bizarre, yet serious moments of our lives. She completed a BA in financial mathematics and started dance studies at the Duncan Centre Conservatory in Prague, followed by a BA in choreography at the Academy of Performing Arts in Prague. In 2016/2017, she was an exchange student supported by SEMP at La Manufacture in Lausanne (CH). Currently, she is finishing her MA choreography studies at HZT Berlin and is a scholarship holder of the Deutschlandstipendium. Several of her pieces have been invited to residencies and festivals in the Czech Republic, Slovakia, Germany, Switzerland, Italy, and Japan. In 2019 she was supported by the European project i-Portunus as an intern for a new creation of Euripides Laskaridis (GR).
alicaminar.com

It was difficult for me to shake off the anger between takes, and I found this process interesting. Trying to calm down the fire, but not to lose it all the way so that I could pick it up again easily. To store it somehow – but where and how?
I had to stay very still, so that I could stay in the spotlight, which felt like it made me push my facial expressions even stronger when I couldn’t use my body as much.
I also felt very vulnerable and thought a lot about threatening as an act. Am I threatening in my anger? Doesn’t one most of all want to be heard when angry?

Strange noises were coming from my throat, mouth, eyes, nose. Breathing was affecting this. Restriction, tension, and intention were very prevalent in the action for me. I’ve been having very emotional, scary, and stressful dreams lately. I went into those dreams and tried to take control. I decided how I would act and not just react.
I open my mouth, but nothing comes out. Again and again. With every attempt; failure. A bombastic silence in the darkness. A desperate gesture to be heard, to be seen, to be in control. The palpable anguish emerges just as quickly as it leaves. It’s fleeting but unrelenting. I will not stop. I will not give up. Once more before full destruction. Impossion. Collapse. But this is not the last. I will not be silenced. Though I may fade, my fury never rests.

What kind of material can calm down anger, what can increase it? How can material underline or disturb this explosive mood? We have a space full of hanging empty frames that can be interpreted as open doors or closed frontiers, mirrors, swings, friends or enemies. Different shapes of foam and air objects are ready to absorb strong movements without hurting it or oneself. A stuffing machine offers an experimental and productive field to transform anger into masses or objects to interact with. 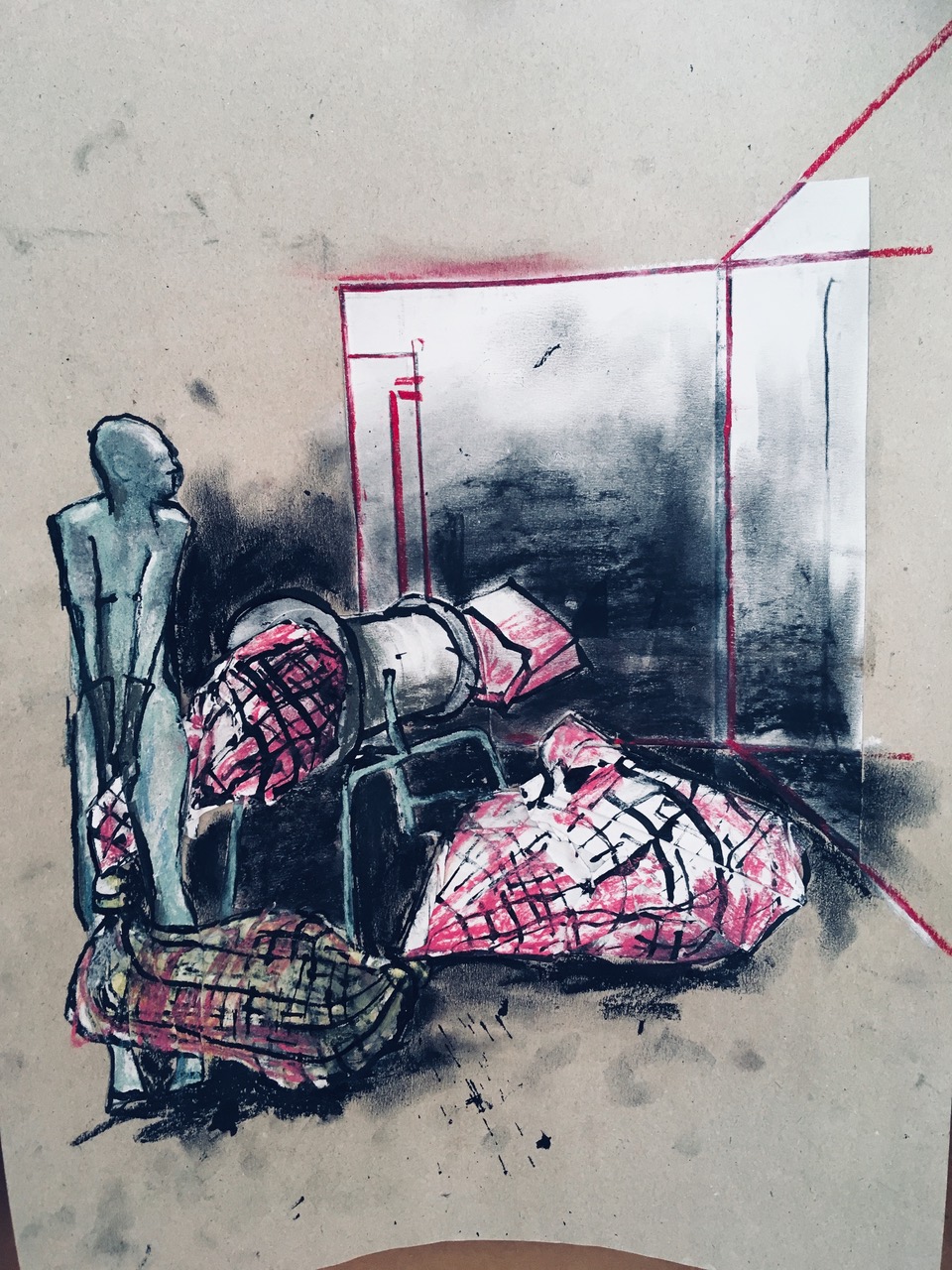 The silent scream or the ‘S’ coïncidence.

Tension embracing my whole body.
No breath. Trying to be silent.
Mouth, dry. Jowl, stuck.
Rhythms become a game, but a pain too.
Slow motion; slower or faster than the ‘real’ slow?
A smile arose.
Sarcastik? Sad? Scard? Sexual? Satisfied? Sadomaso? Serial killer…?
The symbolic of the Joker appeared strongly to me.
Rhythms play. How long do you hold something for?
When do you stop? When you are in pain? Can you then stop? If yes, do you really stop?
Do you continue?

What is, at the start, faken can become true and/or real.

In this play, we research the anger, the rage, what are the reactions of anger in the body.
Through out the process, one of the topics we developed was the feeling of limitation, to feel
constrained. Until now, the Lighting Design tried to develop two diferent aspects:

The first aspect was to think, in literally directional parameters: Where does the anger comes
from? The lighting design proposal is to bring the light from inside the stage, not from the
audience. Not front light, but back and side light. That way, the performers are lit from the same
point that the anger comes from. From our insides, non visible parts. To have a very clear
spatial separation, color temperature would reinforce the directions. The light coming from the
back would be warm and the side light would be cold. That would be done with the diffuse
general light and also with occasional focus for specific scenes that needed to be isolated from
the rest of the space. 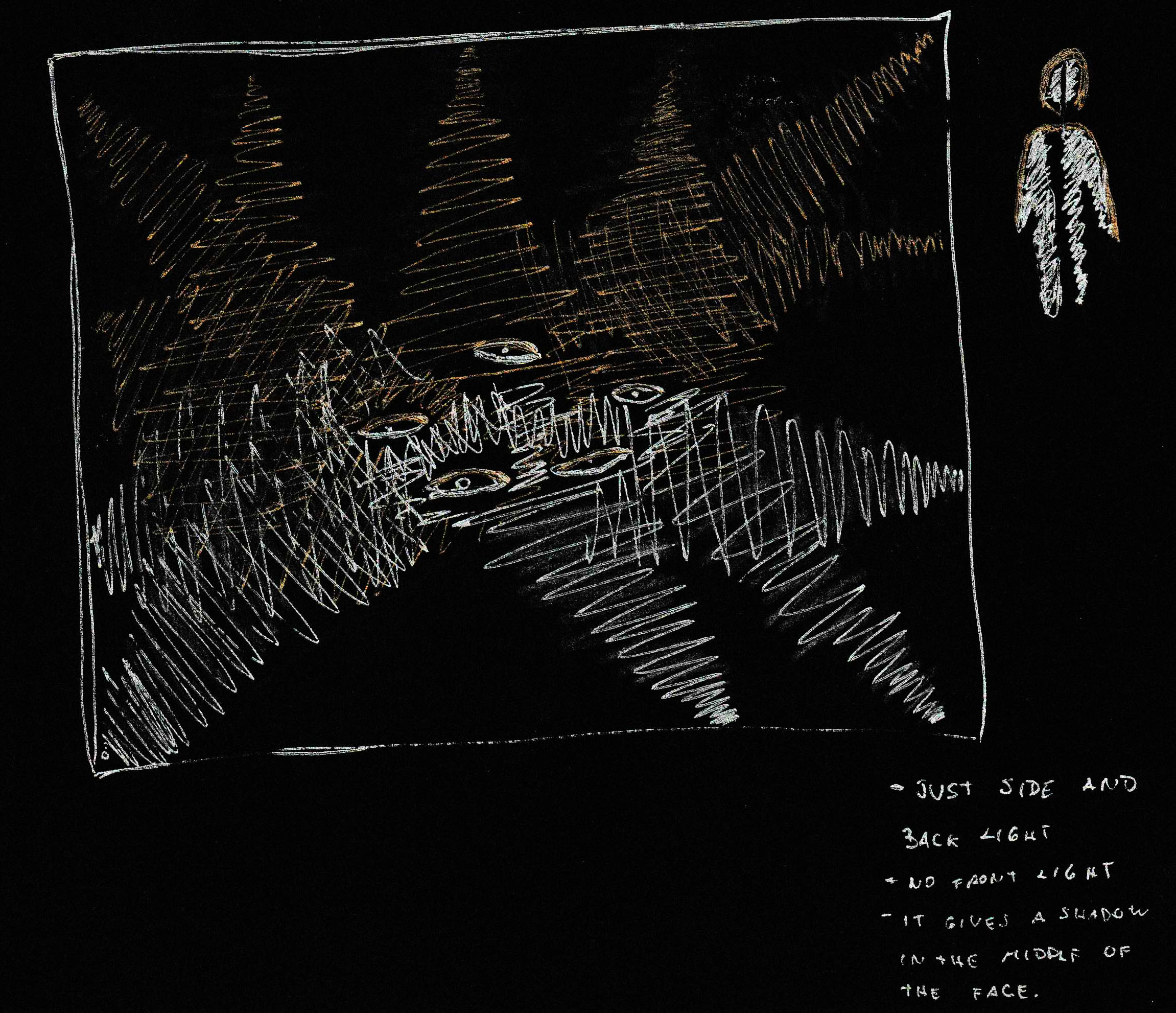 The second aspect was to bring this image of limitation, constraining, strict boundaries. The
focused light showing this “borders” could come from the top or from the side. The sketches
show how this options would lit the bodies of the performers. 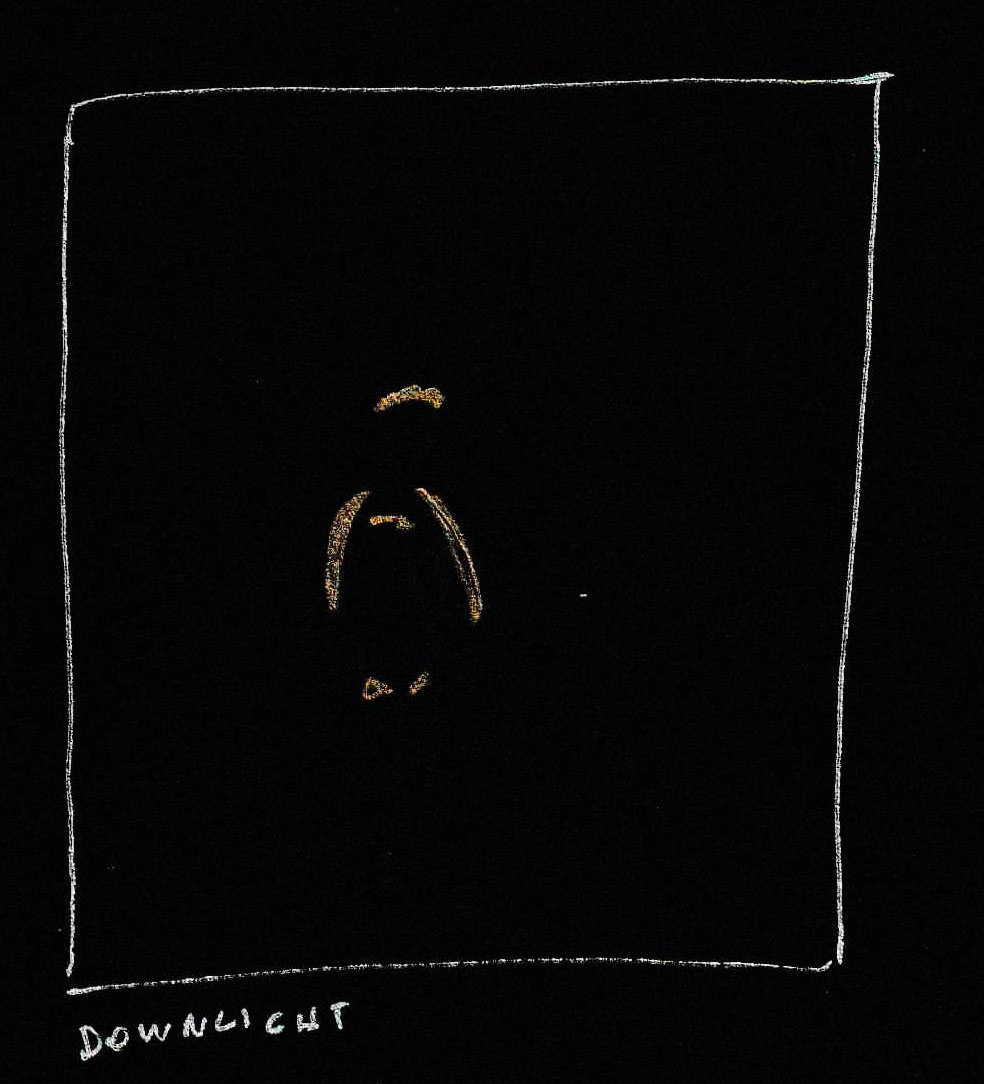 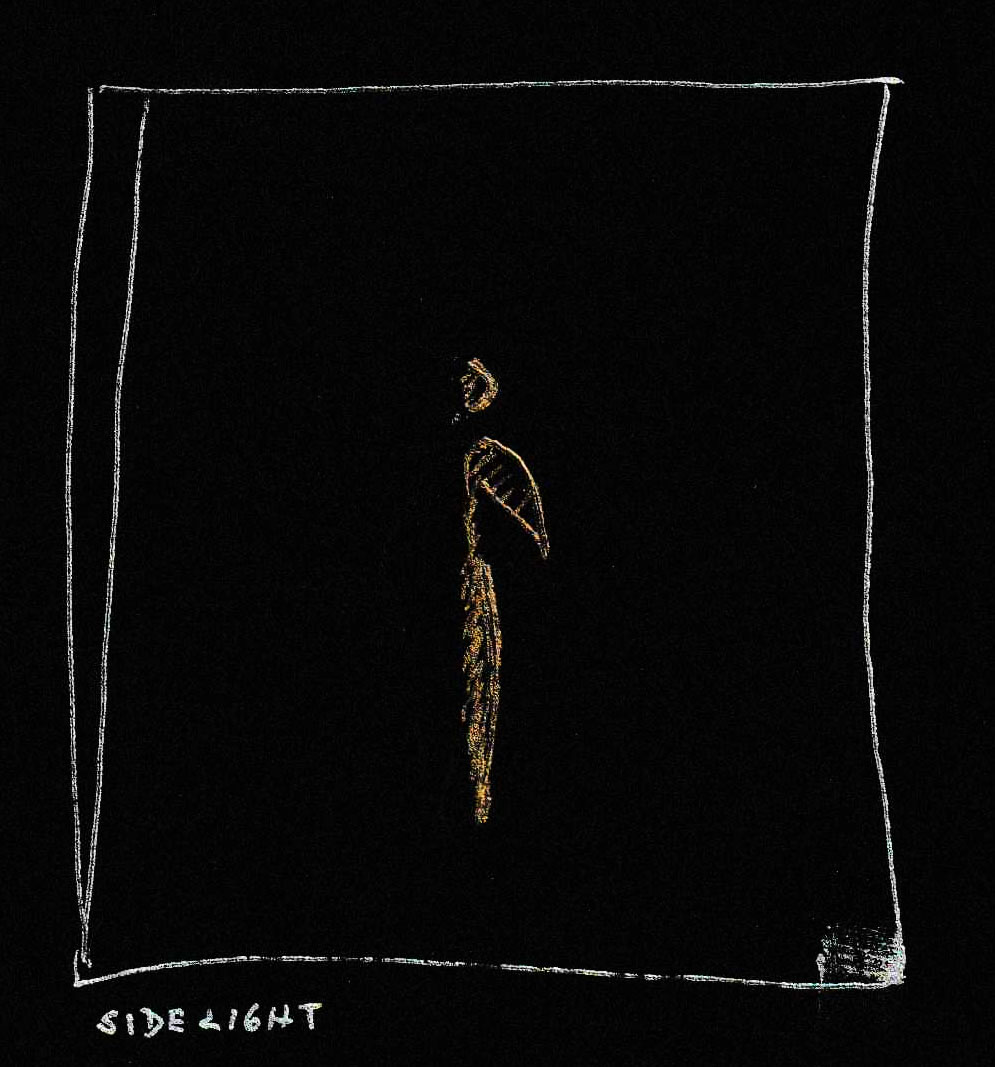 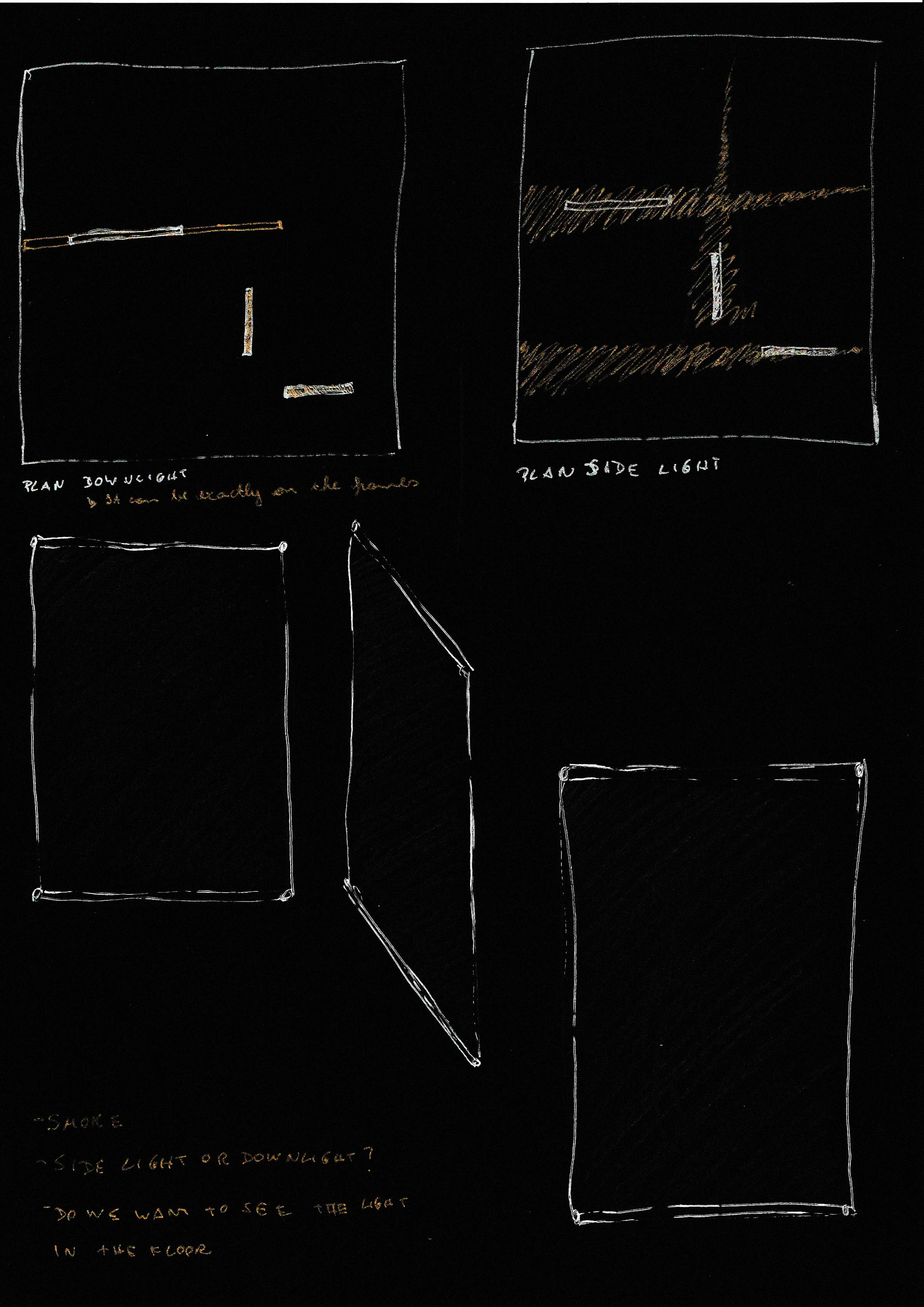 The unsaid
the one that is there but cannot be seen
the silenced and wordless
Butstill too able
Compelling
Full bodied and more powerful than usual
It Is supposed to be heard away than the cells of the oral cavity
Is this enough space for the invisible to be seen?
Is the wordless able to be heard?
It is restless
that’s why it can be moved
Sometimes the unexpected needs to be dissolved in the air
Like a bubble of air in front of your mouth
Just to be dissolved


And there comes the light in the black.
which is directing its own movie
Time and space. between invisibility and visibility
It opens up the space for the presence to be hidden behind
To be left behind
And to let invisibility reclaim its presence
There is the choice of being (un)seen and this is what triggers the pulse
Showing and Disappearing
Displaying and hiding
The tension of this pulse
Back and front
on and off
off and on.